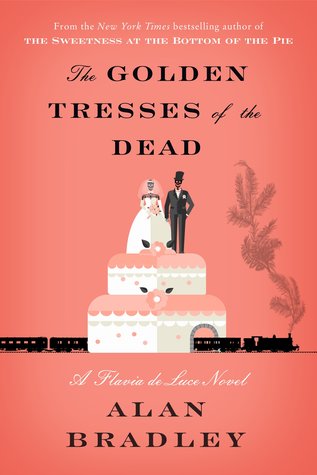 It’s autumn inside Bishop Lacey’s chapel and the interior is decked with exotic flowers and decorations as Flavia de Luce’s sister, Ophelia is getting married. After the ceremony, the new couple are about to cut the wedding cake together when suddenly, a severed finger is discovered. Flavia wraps up the finger using a cloth and take it straight back to her lab where she and Dogger solve this new mystery: whose finger is it and where did it come from? How did it get inside the wedding cake? An expert in chemical poisons, Flavia has solved many mysteries, sharpening her detection skills and deciding to turn professional by setting up shop inside Buckshaw with Dogger. Little do they know that their first case together as professionals is closer to home…

So I have been trying to look for answers as to whether this is the last book in the Flavia de Luce series. There is nothing on Goodreads that says it is and neither the synopsis, although someone left a comment saying that Alan Bradley was signed to do ten books for the series, and ten books I think, is more than enough.

In each book, Flavia finds a different mystery inside Bishops Lacey with a different list of suspects, and a different corpse that was gruesomely murdered and yet, I felt a repetitiveness with the last nine books. The stories are like this: you have Flavia finding the remains of a murdered victim (and it’s usually a severed hand or body part that she finds), she takes note of a list of suspects and these are recurring characters that were introduced before, her sisters make fun of her (this happens on and off) until she finds a trail of clues that involves doing tests at her lab, and then Flavia goes face to face with the number one suspect who either tries to escape or kill themselves before the truth comes out. The case concludes as Flavia tells Inspector Hewitt how she figured out how and why the crime was committed based on her observations and experiments (and a little help from her friend, Dogger). So that’s how these stories are played out, except Flavia’s older sister, Ophelia is married and off to her honeymoon with Dieter, and Arthur W. Dogger & Associates is finally in business with its first client, Mrs. Prill and her missing letters that are somehow connected to the severed finger that was found inside Ophelia’s wedding cake.

I find it tough to keep track of all the secondary characters of Bishops Lacey that come back to make a reappearance again. We do see some of those characters, this time a ladies church group that I sort of remember being introduced to in the first five books, (who can really remember), and Undine, Flavia’s cousin is living with her and her sister Daphne in Buckshaw. I love seeing Flavia and Dogger working together! In previous books we don’t see much of them, only occasionally when Flavia is in need of help or has questions about adults that a twelve year old doesn’t understand. But in this story, now that Arthur W. Dogger & Associates is in business, Flavia and Dogger are working closer together to crack their toughest case yet, this time dealing with medical remedy hoaxes and famous names of well-known English figures. Their first client came from a recommendation with Cynthia Richardson, the vicar’s wife, because at this point in the series everyone in Bishops Lacey knows all about Flavia de Luce and her crime solving work with the village’s most bizarre murder cases even Inspector Hewitt has ever seen.

Watching Flavia and Dogger working together is one of things I anticipated from this story. What began as a friendship between two kindred spirits grew into a business partnership, kind of like Sherlock Holmes and Dr. Watson although Dogger is no blundering assistant. In fact his medical knowledge and astounding conclusions after deducing even the most elusive evidence and observing the tiniest behaviours of others makes him the most valuable ally. Even Flavia was easily impressed, for this is the first time we see more of Dogger outside his usual element.

I can’t say much about the mystery itself as it was similarly like the other mysteries Flavia solved from previous books. You have the quirky characters, the different parts of Bishops Lacey which Flavia goes to with Gladys and Dogger, and funny enough her intolerable cousin Undine tags along too and has proved to be unsuspectingly helpful. The story concludes as Flavia once again meets Inspector Hewitt and explains in her words the identity of the murderer, their motive, and how the victim was poisoned, giving us readers our final applause as my favourite twelve year old detective solves her first official case of Arthur W. Dogger & Associates (and this won’t be her last). It seems like everyone has a new beginning: Ophelia is married, Daphne is writing her own book, and even Undine is settling inside Buckshaw just fine. And with Bishops Lacey not short of murders and mysteries to crack, there will always be something for Flavia and Dogger to do together.